It sounds like people who think their pet should have a trait of friendliness are strongly on the hunt for a new pup. This quality is something they want in their pooch!

Today we’re going to introduce you to a dog that’s been aptly described as “one of the friendliest out there.” This pooch has a big personality, making them one of the best dogs for pet owners.

Have you ever heard of the poodle hybrid, the Pomapoo? They are the latest designer dog to hit the market and are hyped up to make you fall in love. If you’re looking for a pup, it’s best to do your research before purchasing one.

The Pomapoo is a mixed breed dog. They are small and intelligent, but also have the qualities of the Pomeranian & Toy poodle breeds. Make sure to visit our stores to see some adorable puppies that you can bring home in no time.

The pomapoo may have existed many years ago but it wasn’t until the late 1990s when people started to standardize the crossbreeding of the pomeranian and the poodle. According to archives people in North America wanted to mix these two breeds to minimize health problems associated with pure breeding. They also wanted to create an intelligent and affectionate dog that can make their masters happy. And to their surprise, the pomapoo possessed these traits and much more. they have big personalities that will surely steal the hearts of everyone around them.

The Pomapoo is a relatively new breed. There are not many standards when it comes to size, but as a mix between Pomeranian and Toy Poodle parents, you can expect Pomapoos to be on the smaller side. The pomapoo’s height and weight depend on their poodle parents. At first there was no standard poodle size to match with the pomeranian but as time passed people chose to standardize the pomapoo with a toy poodle. With this standard existing pomapoos usually grow from 8 to 10 inches and weigh up to 15 pounds. With males, generally larger and heavier than the females.

Their personality is no doubt one of the biggest in the poodle mix world. Aside from being affectionate and friendly, they are also very entertaining much like their pomeranian parents.

They love to be treated as the star and want to live up to the honor of the center of attention. They want to be looked after and get a lot of affection, which is why they are very friendly. Their biggest goal is to show their masters’ families that they are a vital part of their life.

In terms of pet-friendliness, these dogs are rated three out of five. This is probably because of their sensitivity towards rowdy dogs. They don’t like it when other pets. Especially bigger ones disturb their peace. If this happens they could show aggression to the other pooches. To avoid this from happening early socialization is necessary for your dog. So they can get used to each other’s personalities in time.

They’ll start to get along and you’ll see how loving your pomapoo can be. If you’re wondering if they have a high prey drive and could potentially run after smaller animals such as squirrels, chickens and rabbits don’t worry pomapoos have a pretty low prey drive and with socialization. You can rest assured that they won’t run after other animals.

If you’re planning to have a pomapoo train them and socialize them as early as possible. don’t wait until they’re six months old which is what most people do. At eight weeks old they should already be able to socialize with other pets and people. At three months they should already be receptive to people places objects and much more. With these milestones achieved you can guarantee that your pomapoo will have a good temperament and be an excellent companion.

With early training and socialization, there’s no doubt that pomapoos will become outstanding family members. They bring so much joy to the family so you’ll be lucky to have one. If you do, don’t forget to involve them in various family activities. These dogs love to socialize and party. So don’t keep them from having fun. You also need to apply positive reinforcement to unleash positive traits. whenever they do something good praise them and give them treats. This way they get accustomed to displaying positive traits and suppressing negative ones.

In terms of children compatibility Pomapoos make outstanding babysitters. They can entertain your children and keep an eye on them at the same time. However, you may need to instruct your older kids never to play rough with the pomapoo .

Seeing how small they are these dogs can easily get injured especially with rough play. You also need to teach your kids proper dog care. They should not disturb the dog while eating or sleeping. Children should also avoid tugging the dog’s ears tail and hair. If they get hurt they could get aggressive and snap at your children.

Caring for a pomapoo

Although these dogs were created to eliminate the risk of disease. They can still have common illnesses such as patellar luxation and cataracts. This is why it’s important to learn ways to keep them healthy. First you need to consult your vet regularly to determine the proper diet and grooming. Basically, you need to impose a regular feeding schedule.

So your dog doesn’t become overweight. When it comes to grooming don’t forget to brush their hair trim their nails and clean their ears .You also need to check their coat from time to time to avoid pests such as fleas and ticks. Even though their coat doesn’t easily get dirty you still need to bathe them regularly to promote hygiene. Other than that it should be relatively easy to care for a pomapoo.

Yes. The Pomapoo is a mixed breed dog — a cross between the Pomeranian and Toy Poodle dog breeds. It has inherited some of the best qualities from its parents, as well as new ones that are unique to its own breed. Being compact and intelligent, this pup will make for a perfect companion that can be affectionate to both of its owners. This can be a great go-to pet for large family households, as they are easy to keep, and they don’t need lots of attention. They typically don’t bark much and they often are easy to train.

Because it has the Poodle in its ancestry, Pomapoos are sometimes promoted as being hypoallergenic. However, allergies aren’t caused by a particular coat type but by dander which is produced when all dogs shed their dead skin cells.

How much do Pomapoos cost? 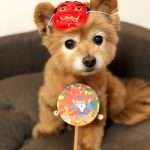